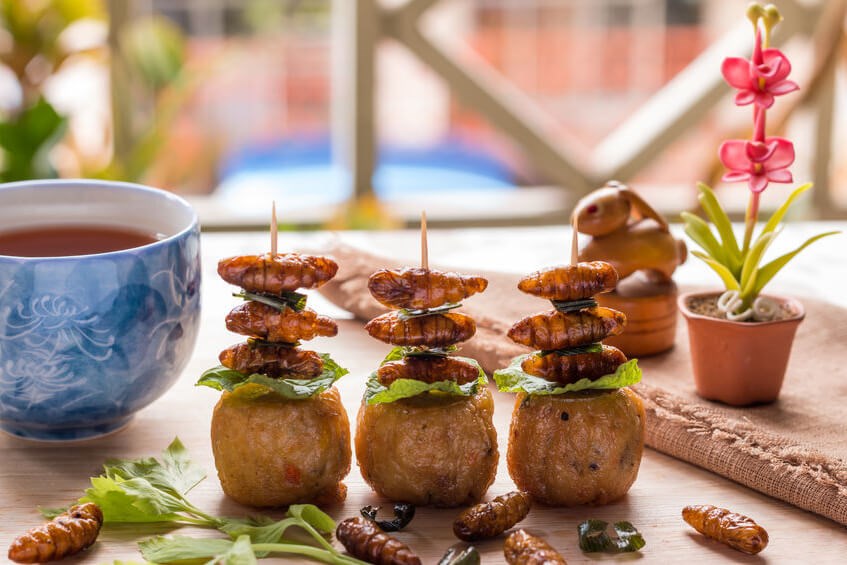 Could eating insects and being vegan help protect the environment?

In recent years there has been a lot of talk about the need to eat less red meat and to eat more plant-based foods with the arguments being that they are not only good for your health but they are more environmentally friendly.

The need to eat more fruit and veg is certainly easier to stomach for many than a bowl of grubs (probably not helped with TV shows such as I’m a Celebrity Get Me Out Of Here!) but the idea of eating insects and grubs is gaining traction. And there are some substantial benefits for catering companies and diners.

Good for you, good for the planet

Edible insects have been labelled by a number of businesses as ‘the original superfood’ because of their health benefits. They are nutritious, great for the gut and typically high in protein and they aren’t just good for you, they are good for the planet.

With over 3,000 different types of edible insects, they are in abundance and are a sustainable source of food. According to Cowspiracy, producing 1kg of protein from beef emits 2,850g of Green House Gas into the atmosphere, whereas 1kg of insect protein only emits 1g. Beef and other meats also involve intensive farming including the use of chemicals such as pesticides, which also has an impact on the environment.

Tastes too good to be true?

Being good for the environment and good for your health isn’t enough for insects to become an everyday dish. They need to taste good as well and while our experience has been mixed, and very limited, companies such as Eat Grub have come up with various different ways to make edible insects tasty. Mealworms, for example, make a great flour substitute.

We believe that as this trend continues to grow, our tastes may develop as well, making edible insects more acceptable.

If you’ve watched the series An Idiot Abroad, you may remember scenes where Karl Pilkington shows his disgust at the idea of eating various grubs and insects while visiting China and while the idea may seem strange to many British people, it’s widely accepted in other cultures including many in Asia.

As well as getting used to the taste, there’s also the perception barrier to overcome, but the trend of eating grubs is certainly growing as the idea becomes more acceptable.

Entomophagy is a word used to describe the practice of eating insects by humans and while it’s growing in popularity, it’s not actually new. The eggs, larvae, and insects have been eaten by humans from prehistoric times to the present day and it’s estimated that as many as 3,000 different ethnic groups around the world currently practice entomophagy.

What can you do?

There’s an opportunity for businesses to be unique, stand out and at the same time show how much they care for the environment by embracing Entomophagy as well as vegan options. We certainly recommend doing some tests and trialling different ways that you could embrace what we have labelled ‘critter cuisine’ to see what works best for your business and is acceptable for your customers. You may also need to invest a little in educating your target market as to the benefits and why you are offering these new options.

You may not be ready to start offering insects and grubs as part of your main meals but there are also ways that they can be used as alternative ingredients as part of the food process. We have already mentioned using mealworms as a flour substitute but other, already tested, alternatives include using insects as toppings or extras (such as soup topped with smoky BBQ crickets) or smoothies containing fruit and cricket powder. If you are looking for further inspiration, the Telegraph’s 11 Top bug recipes are worth taking a look at including ‘chocolate chirp cookies’!

You may also be interested in attending the Food Matters Summit on the 19th – 20th November at London’s ExCel.

For more interesting facts and views on eating insects, get in touch with our food service consultants at Ramsay Todd Consultancy.